Boarding the ship, a day at sea and my first visit to Norway and the village of Eidfjord.

We were up at 6am to finish packing and to grab a quick breakfast before heading back to Amsterdam Centraal Station to get the train to Rotterdam. Despite it being early on a Sunday morning, there was a train to Rotterdam every 15 minutes which was impressive.

We arrived in Rotterdam at about 8:30am and headed to the left luggage area to drop off our suitcases. We then made for the tourist information point in the station where the lady suggested getting the bus tour, which is usually a good idea whatever city you are in.

After our tour we were back at the station so we headed back to get our cases before getting on the tour bus again for another half loop back to the cruise ship terminal. 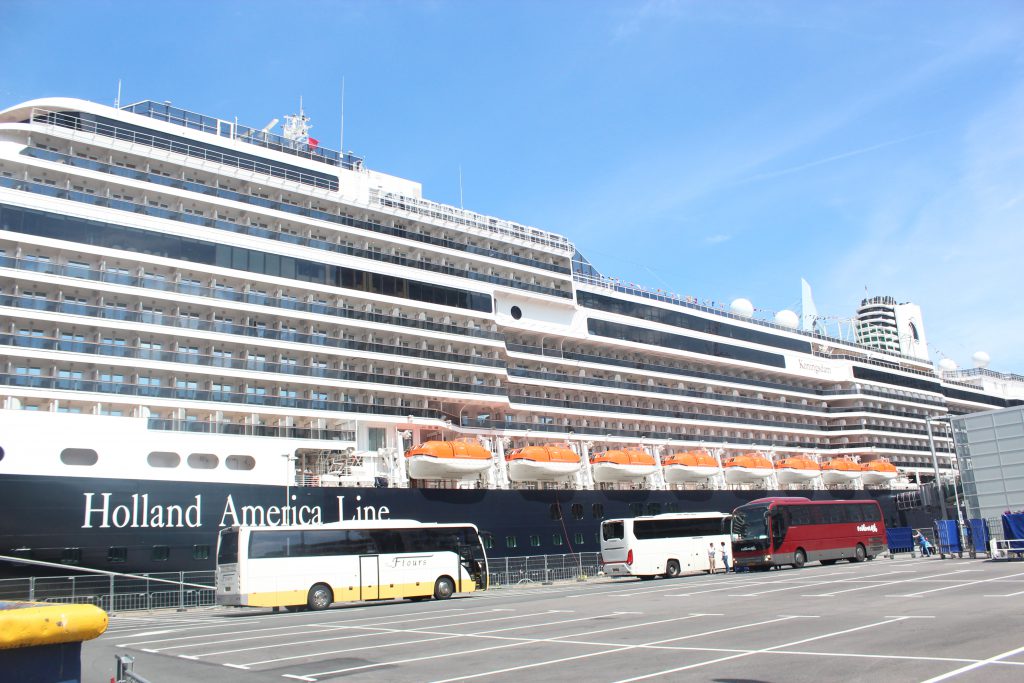 The first thing that struck me was the length of the queue! By the time we got into the terminal building and checked in, we had been there for nearly 2 hours.

When we eventually got on board we headed to the cabin…sorry veranda stateroom…before grabbing a (very late) lunch. After trying to work out what to eat among the vast array of options, we headed back down to the room to be greeted by out suitcases and so the unpacking process began.

After the mandatory lifeboat drill it was onto the top deck as we left Rotterdam. One of the good things about Holland America is they have someone on every ship who does presentations about the ports you are either visiting or are leaving. On this occasion we had Ian Page (the ships Location Guide) telling us all the facts and figures about the Port of Rotterdam, the largest port by area in Europe and they offload 3.13m and load 3.5m containers per year.

After spending about an hour on the top deck we headed down to the bottom of the ship for my first experience of church at sea. Holland America always have a priest on board and he made a good attempt at running a service, with unfortunately only seven of us, made up of Presbyterians (yours truly) and some Lutherans.

After that it was time for the main dining room for dinner but I went for a pizza afterwards as dinner wasn’t massive portions. After dinner it was back to the room to get changed before settling down to watch the Euro 2016 final. The result seemed to disappoint most of those watching except for a small Portuguese contingent who got so excited they nearly fell into the pool. 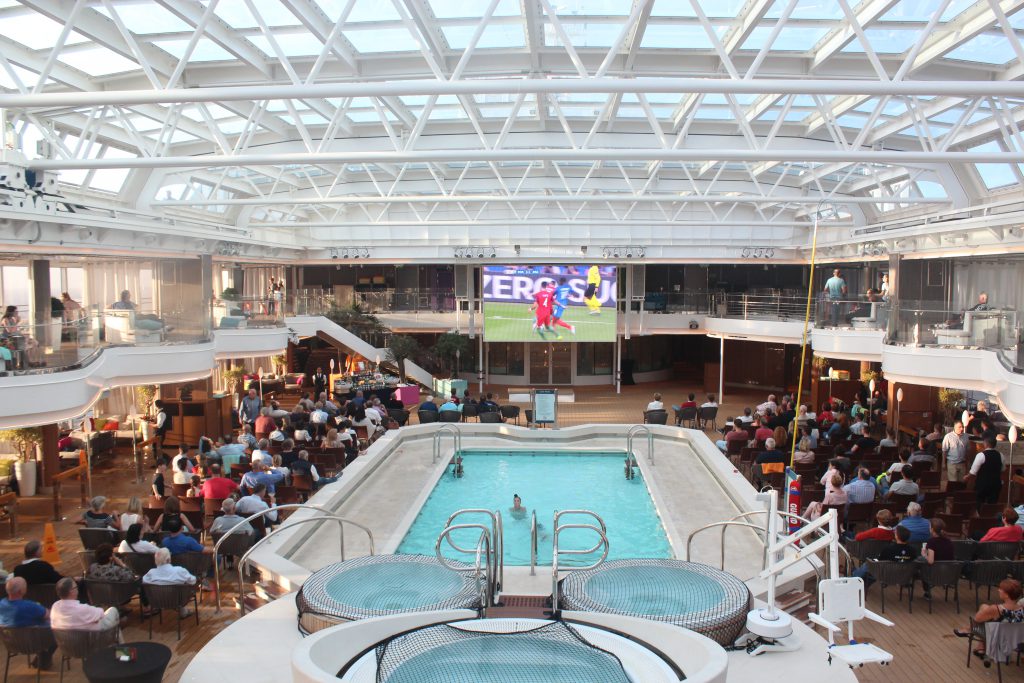 We began our first day at sea with a relaxed breakfast and generally taking it easy exploring the boat before it was again time for food. The lunch options consisted of a large salad bar as well as several hot food areas and dessert counter. I opted for a salad bowl to start with before having some noodles and then some ice cream (spot the child) for pudding.

After this it was time to meet the Captain, Darin Bowland, as he answered some questions about the ship. We heard several interesting facts such as the GPS of the boat is accurate to 1m, there are 400 CCTV cameras, they use 800 tonnes of water per day, there are 52 different nationalities on board and they burn $1.5m per month in fuel.

After this we sat on for a talk by Ian (the Location Guide) all about Norway and the ports we were going to visit, which was very informative before it was back to the cabin to get ready for dinner.

After the service is was up to the room to get changed for one of the formal dining nights. If I was feeling cynical I would say that this is a good opportunity to dress up, think you’re a business man and spend a lot of money in the on board casino, but it was nice to make an effort regardless.

For dinner I opted for pineapple with coconut, chicken soup with soba noodles, maple lacquered duck and finished with some lemon meringue cheesecake.

After dinner it was time for the first show of the week “One World” which featured songs with an environment theme such as Louis Armstrong’s ‘What A Wonderful World’ and Toto’s ‘Africa’. 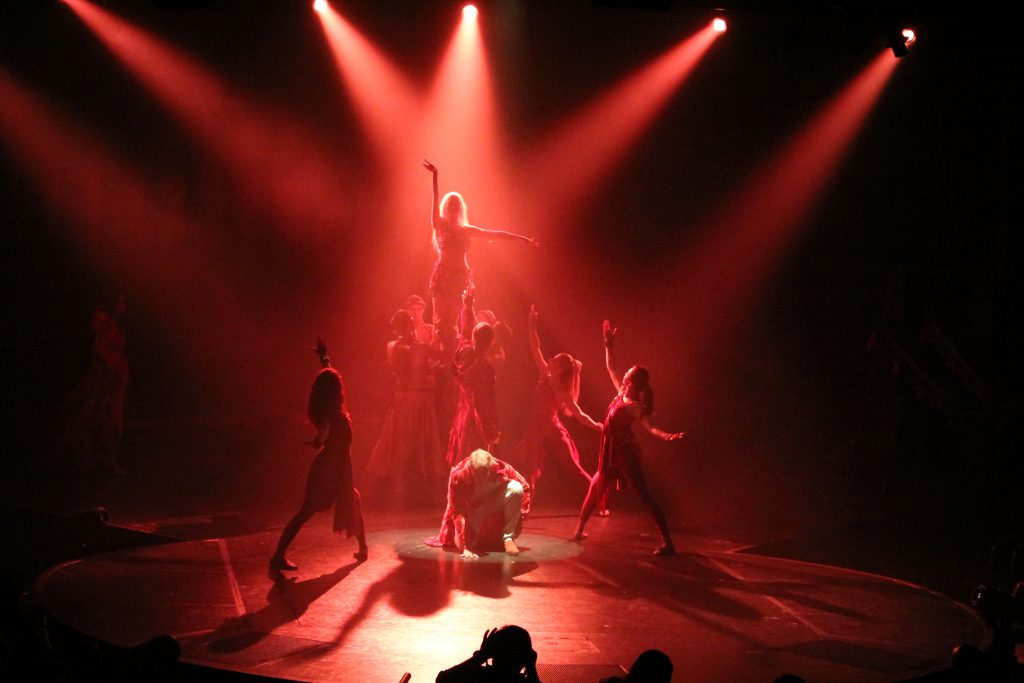 This went through several other well-known songs with a great trio singers and a brilliant group of dancers. I have always said that cruise ship entertainers are some of the best out there given the short period of time that they have to prepare shows and I stand by that.

The show was that good that we sat on to watch the second show before heading back to the cabin to get changed before a walk around the boat before bed.

My first taste of Norway soil was the small village of Eidfjord, home to just over 900 inhabitants. You know it’s a small place when the tourist office says that the “towns’ taxi is away’ so we opted for the tourist bus to the Voringsfossen waterfall.

The higher that we travelled outside the town the thicker the cloud was and the grunts from the driver suggested that we wouldn’t be able to see anything. We arrived at the hotel car park near the waterfall to be met by fairly thick cloud but decided to walk down to the waterfall anyway. 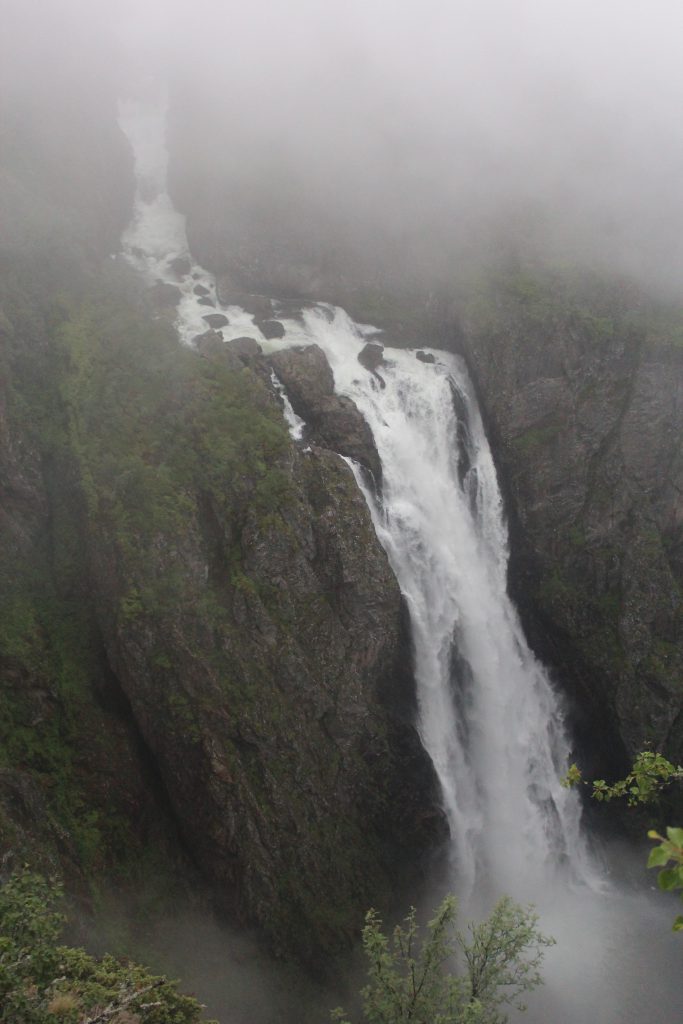 When we arrived at the view point we could certainly hear the massive sound of water falling 280m but couldn’t see anything. We hung around at the top for about 5 minutes and suddenly the clouds parted for literally a minute which let us see the marvel of the waterfall.

Once we were back down in the village we took a look in the local supermarket. I knew Norway was expensive but a packet of Haribo was the equivalent of £5. After not buying anything, my mum and I headed off on a walk through the forest which eventually took us up a hill and along a path at the bottom of the mountains. We initially missed a Viking graveyard and walked about half a mile past it before going back and eventually finding it. 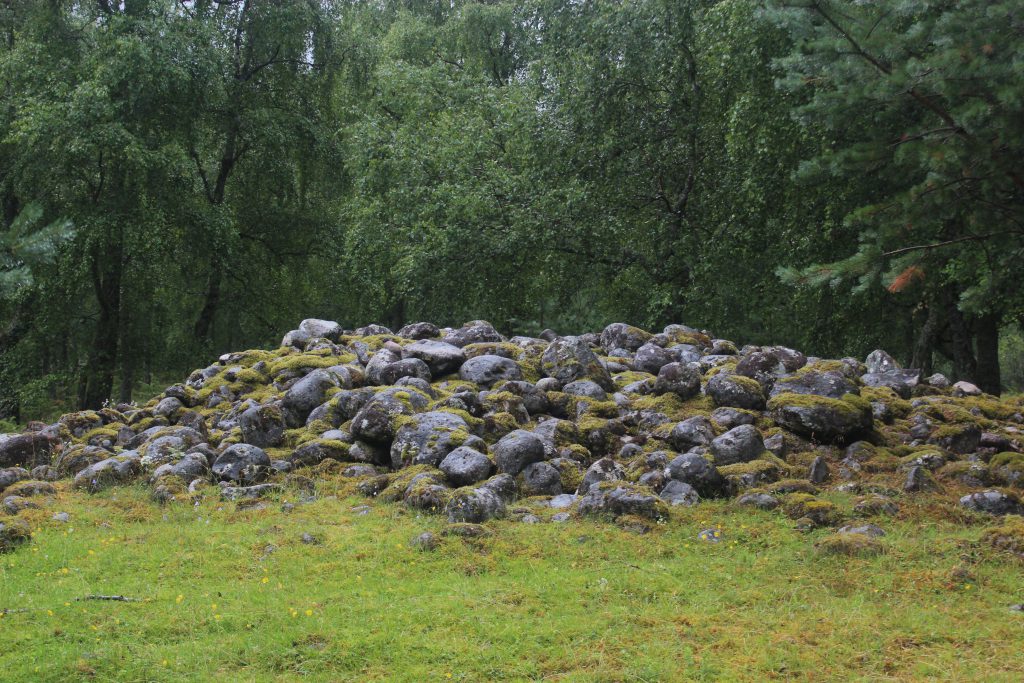 The tourist information man said the walk would take 90 minutes but it was over two hours before we were back in the village. We then headed in the other direction towards the Old Church…which as the name suggests was a church that was really old. I was surprised to see no else about but it was an amazing sight to see a building from 1309 in such good condition. 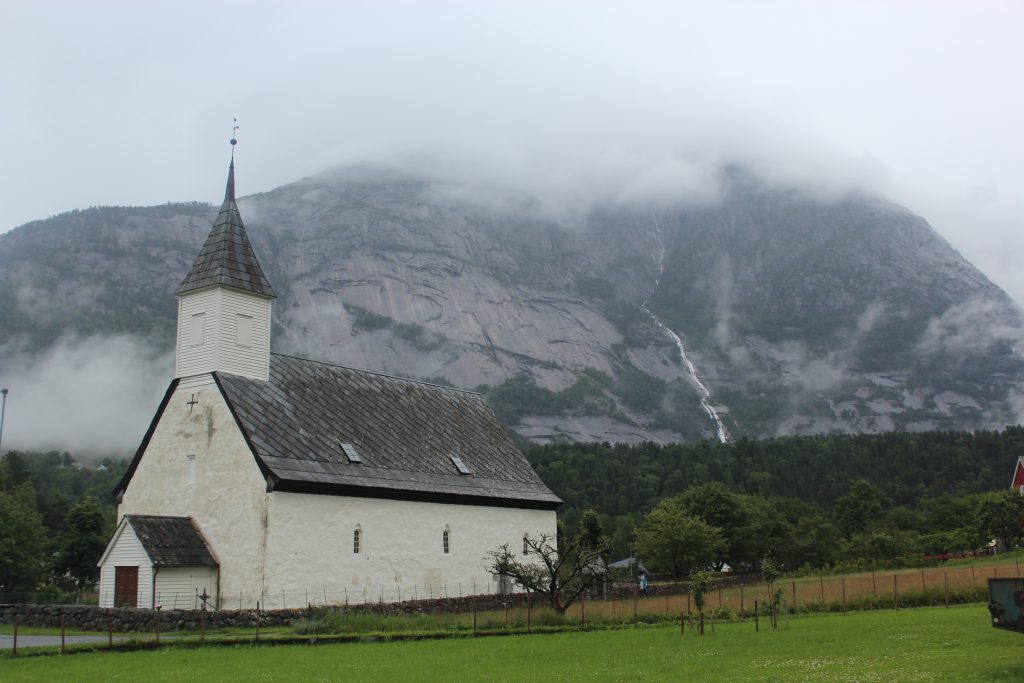 Back on board there was just time to get an extra coat from the cabin before it was back on deck for some more scenic cruising. The main sight was the Hardanger Bridge which is the longest bridge in Norway. This is one of the longest suspension bridges in the world and and the longest tunnel to tunnel suspension bridge in the world. To get underneath it the main mast and some communications aerials had to be lowered and the clearance was just under 5 meters. 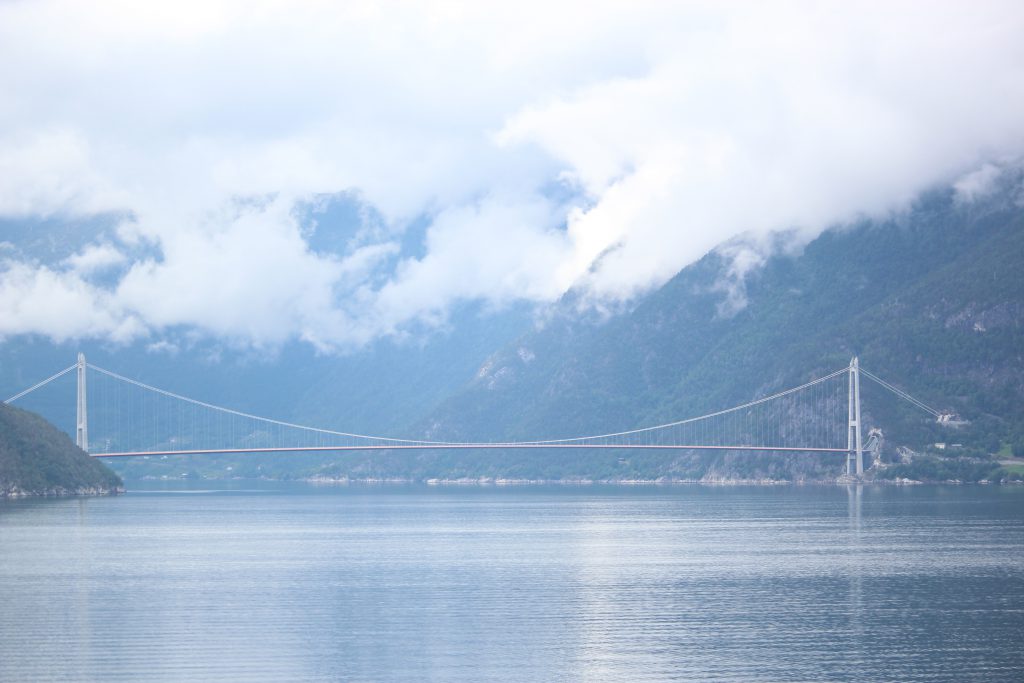 It was then back to the cabin to (mainly to warm up a bit) before it was off to the buffet for dinner before the show. Tonight’s entertainment was a Japanese magician called Tempei who amazed us all with card tricks, juggling and his brilliant Diablo moves.