Last Saturday night I headed to the Courtyard Theatre for the latest production by The Lambeg Players of the Sam Cree play ‘Don’t Tell The Wife’. It was the first time seeing them since their Christmas Production of Jack and the Beanstalk, but five of that cast featured in this show. 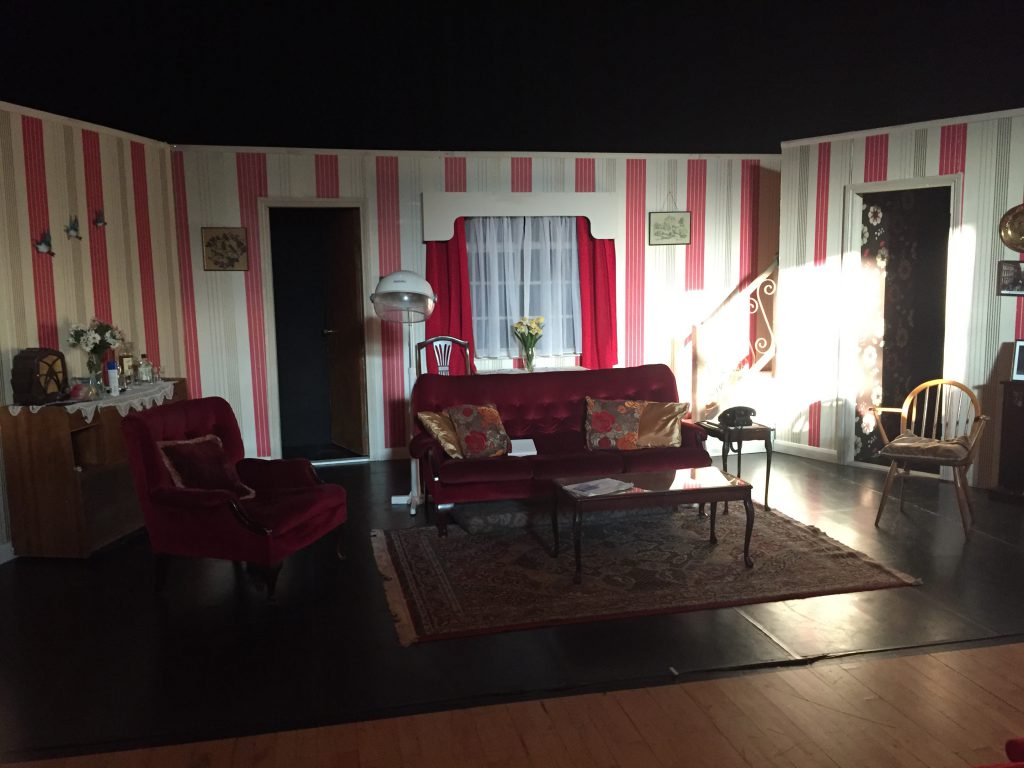 ‘Don’t Tell The Wife’ was written my local playwright Sam Cree in 1967 and is set in 1960’s Belfast in the Willis household, where Edna is convinced that her plumber husband Bobbie is interested in another woman; who just happens to be a Roman Catholic! He isn’t, but he does have some secrets of his own. Her attempts to stop him lead to crazy misunderstandings with a French student, a male escort, and not to mention the ‘Roman Catholic’…who is actually greyhound called Bridget!

The play opened with Enda working on Isobel’s hair for her work dance before Bobbie and his apprentice Cyril arrive home from work. The talk between them is that Bobbie has decided to buy a greyhound but he doesn’t want to let Enda know. Bobbie has also been suspended from work as he walked in on a woman in the bath as he had gotten the wrong flat.

Bobbie and Cyril decide to go and look at the dog in the local pub but after they have left, Enda gets a call to tell him that Bridget will be late, and she immediately thinks the worse. This, combined with her husband approaching the ‘tricky’ age of 50 and starting to take vitamin pills makes her think that her husband is cheating on her.

Isobel is little help through all of this and makes things worse when she tells Enda that she needs to take in a lodger to make Bobbie jealous. It just so happened that Edna’s husband knows someone, George, in work who is looking for somewhere to stay do Enda tells her to set it up.

When the lodger arrives it transpires that George is actually Georgette who is a young French student. Bobbie plays the charm card which results in even more jealously from Enda. Things comes to a head when Bobbie tells Enda that she must walk Georgette up at 6am the next morning…so that she can go to mass!

This results in Enda getting her finest picture of King Billy out of the roof space and onto the wall for everyone to see. Several references to ‘glorious Billy’ etc followed and there was no doubt as to what foot the Willis family kicked with.

After George has been dispatched to Isobel’s house, Enda (on Isobel’s advice) phones up a local escort agency to arrange a date for her, all in a bid to make Bobbie jealous.

The male that turns up is actually a union official, Eric, to speak to Bobbie following his suspension form work for walking in on a woman in the bath, but Enda thinks he is from the escort agency! Some awkward moments followed with Enda suggesting things ,which made Eric very hot under the collar. Eventually Enda meets the right male, Basil, who is the generic RAF pilot from WW2 who ends most sentences with ‘tally ho’.

In the meantime, Bobbie gets talked into looking after Cyril’s girlfriend while he sees the other one off to the boat. She is as blind as a bat and mistakes Bobbie’s vitamin pills for headache tablets and as a result becomes frisky and chases Bobbie around the house.

When Enda comes home with Basil and before the situation can be explained it transcribes that Basil and Bobbie were in the same regiment together during the war! This of course starts them on a reminiscing journey back through WW2 and after Basil has taken full advantage of the free whisky, they all call it a night.

The play ends with Enda and Bobbie reconciling their differences and finishes with Isobel now being the one with marital issues!

I have been to see a lot of Sam Cree plays over the years and his writing is fantastic. His shows have a lot of ‘orange’ and ‘green’ in them but that’s what makes it brilliant – he manages to write in such a way that slightly offends both sides which always results in fantastic comedy…something which modern Northern Irish playwrights are sometimes nervous to attempt.

I’ve probably seen around 50 Lambeg Players productions over the years (since my first outing in 1993) and it was my second time seeing Don’t Tell The Wife. The cast has changed a bit since the last time but everyone was fantastic and the camaraderie between the cast lead to some great ad lib lines.

What makes armature dramatic, and especially Lambeg, productions brilliant is the close relationships which the cast form. This is obviously helped by the Boyd and Bennington clans filling a lot of the roles but from those I know in the company, they are all one big family anyway.

The show runs in Portrush (Summer Theatre, Town Hall) from 24-27th August and in the Belvoir Players Theatre on 16th and 17th September.